However, despite that, it has been in practice for a long time, and new methods for riding along the kids are being introduced. One such invention is the bike trailer.

Bike trailers are widely perceived to be more secure than other conventional methods of riding with kids. However, in a real sense, are kid bike trailers safe? In order to avoid such situations, it's always wise to research and opt for the best baby bike trailer in the market. 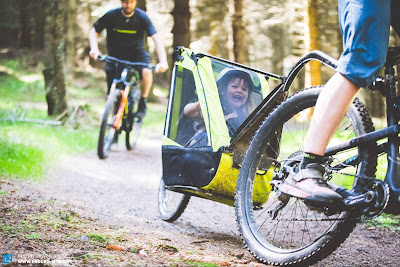 To answer this question, we need to keep in view the possible disadvantages linked with the bike trailers along with the precautionary steps that can minimize any such potential threats.

One of the most prominent perceived cons of bike trailers is their low-to ground height. This means that it compromises their visibility on a busy road where a vehicle, such as a truck or a bus, following from behind, might not notice the trailer. This could lead to a serious accident.

Solution: To counter such scenario bike trailers come with a flag pole rose to a considerable height that could serve as a medium to indicate a bike trailer passing by. Moreover, your town may have separate paths for bicycle riders.

So, as long as you keep on the dedicated paths, the chance of a collision from behind is almost zero. However, on a busy road, the threat still remains, and we can rule out this aspect that could compromise the safety of bike trailers.


- Riding on a rough terrain

Riding on an extra-bumpy and rough terrain such as dirt track or off-roads means the riders are subjected to more jumps and shocks. Any such significant shock to the trailer can force the occupant to fall out if the seat belt is not harnessed.

This could lead to considerable injuries. Not to forget, too much violent shocks and vibrations can highly unpleasant to the kids and can cause pain in neck and back.

Solution: To tackle such a situation, we need to double-check the seat belt before leaving for the ride. Bike trails also have an external covering with multiple harnesses to avoid this scenario. Also, a good suspension system can minimize the adverse effects of shocks.

A trailer might tip over while taking a sharp turn at a high pace or when going over a big bump on the road. Moreover, applying the brake at high speed might make the trailer slip. So, there is always a chance of the trailing toppling over and injuring the occupant.

Solution: Fortunately, an efficient way to prevent this is by opting for a ball and socket joint, also known as rollover hitch. This will keep the trailer in an upright position even if the bike falls over. It is a must to use a thing if you are conscious about the safety of your kid.

There is no doubt that kids bike trailers offer many perks in favor of both parents and kids. Whether it is not safe or not entirely depends on how you intend to use it.

As stated above, every possible threat has an antidote that we can sort out. However, apart from some situations that we can avoid manually, bike trailers are safe to use if done with precaution.